Last Day on the Job

Friday marked my last day at my internship and I have to say I am sad to leave. At the end of my internship I am amazed by how much I have learned in the mere two months I had been there.

I have the ability now to look at a coin (ok, a select few coins) and know more about it than just it's denomination, I know it's past and history. I learned the difference between coins that are "double eagles" (twenty dollars), "eagles" (ten dollars), "half eagle" (five dollars) and quarter eagle ($2.50 dollars).

I have more of an appreciation for coinage, especially American. I used to think that American coins were boring and lackluster. While working with coins all summer, I learned the stories behind them and how far American coinage had come. Now I can see the beauty in even the simplest American coin, the penny.

Working in a professional environment also taught me to be assertive and tactful. I had to communicate my ideas on a daily basis and had to be confident in them. I was given tasks that allowed me to put previously learned skills to use, which I was thankful to have at those moments!

Overall I had an incredible experience working for the Smithsonian and would recommend it to anyone interested in history, museums, or political history. Now that my eyes have been open to the world of coins, I cannot help but see them everywhere!
Posted by Allison at 5:30 PM No comments:

Liberty, Letting Her Hair Down

Today's favorite coin that I am featuring is two versions of the 1793 "Flowing Hair" Lady Liberty cent. The first version display on its obverse is an almost "wild" looking Lady Liberty, with flowing hair. And on its reverse, the coin features the popular thirteen chain links design. This first design did not sit well with the public, who reacted negatively to it, saying that Liberty looked to be "in fright". Some also felt that the reverse, which featured chains, was instead a representation for slavery. After two months the design was discarded and the Mint instructed for a new design to be created. 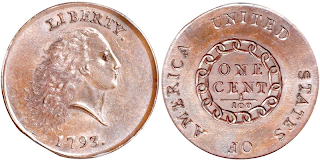 The other version of the 1793 cent has a redesigned flowing-haired Lady Liberty and on its reverse displays a wreath with some sort of unknown plant. The designer, Adam Eckfelt, revised both the obverse and reverse of the previously unpopular liberty cent. Her hair was made longer and the chains were replaced with a wreath.

This coin struck my fancy I believe because of its simplicity, compared to later Lady Liberty coins to come. I like that Lady Liberty almost looks wild and untamed and yet still very regal. I also find it interesting that for one of the first American cents, a woman (albeit fictional) was chosen to grace American coinage and set the trend for centuries to come.
Posted by Allison at 7:56 AM No comments:

Since this is my last week at my internship, I decided to feature some of my favorite coins every day. Today's coin is what has become known as the "Fugio Cent." This coin was designed by Benjamin Franklin in 1787 after the Continental Congress passed a contract for the "coining of a national copper cent." Its nickname, 'Fugio', comes from the obverse sundial design with the phrase 'Fugio' which means "I flee/fly" in Latin. Under the same sundial design is a message from Franklin, "Mind Your Business." Both the sundial and the phrase is a word puzzle or rebus that means "Time flies, do your work." 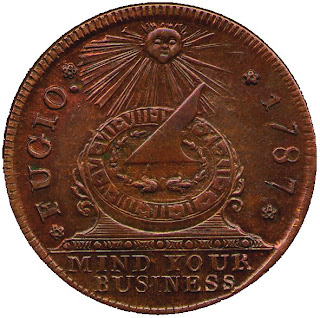 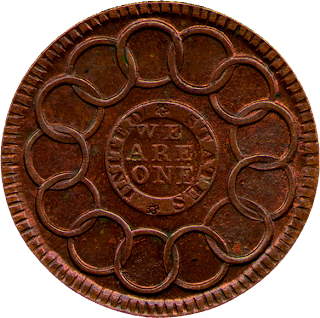 Reverse of the 'Fugio' cent featuring Franklin's chain links. (Image from Wikipedia.org)
This coin has become one of my favorites for its interesting link (no pun intended) to our past. I love Franklin's wit and intelligence on display on our first official cent. Even though the coin seems a little cluttered with all the different design elements, I think it is the perfect coin to represent the new United States.
Posted by Allison at 7:29 AM No comments:

The Susan B. Anthony dollar has become known as one of the most unpopular coins in American history. Is it because it featured a woman on it? Is it because it was merely a dollar coins, which is unpopular to begin with? Was it its confusing color (silver like a quarter) or shape? 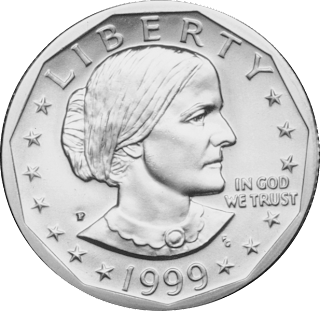 According to a website that features coin collecting, they state, "The Susie B. failed to catch on mainly because its size and color too closely matched the quarter" The Mint then tried to introduce the Sacajawea dollar coin, making it gold instead. A bit more popular than the Susan B., the Sacajawea dollar is still not very popular. This is mostly to blame, I believe, by trying to circulate the dollar coin, which has always been unpopular with the American public.

Image showing the Susan B. Dollar compared to the quarter and other American coinage. (Image from www.rossoverstreet.org)

Another reason that the Susan B. became widely unpopular was because of President Jimmy Carter. According to a well-known Numismatic historian, David Bowers, he affirms that because of the general resentment to the Carter administration at the time, people felt that the Susan B. Anthony dollars "reflect[ed] diminishing purchasing power." Oftentimes the Susan B. was referred to as "Carter's quarter" and not in a positive way.
Additionally, some of the public felt that the coin was just not attractive. Now take that as you will, I personally do not find some of the former founding fathers all that attractive and yet nobody has ever complained about that with previous forms of coins. The former president of the ANA (American Numismatic Association) felt that the previous design idea for the coin, a traditional 18th century image of Liberty, would have been far more beautiful.

Ever since the Susan B., real historic women (I feel that images of Lady Liberty does not count as a female on American coinage) on American coins just has not really taken off, whether it is simply because it is a female on the coin, what woman they choose to put on the coin or the idea of a dollar coin. I know that I have said this before, but I will say it again, I believe the Mint needs to place more American historic females on coins other than dollars. And Lady Liberty does not count as a "historic" female!
Posted by Allison at 12:23 PM No comments:

(Susan B.) Anthony and Cleopatra

While I was perusing through the exhibit Numismatics has in the museum, I stumbled upon this interesting find between Susan B. Anthony and Cleopatra. Apparently, there are noticeable similarities between the design of the Susan B. Anthony dollar and an ancient coin of Cleopatra VII. My question is, was that on purpose or just coincidence? Unfortunately I could not find any more information on whether this was purposely done by the engraver. Regardless, I thought this was an interesting enough find to post. 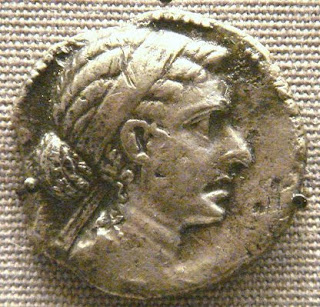 Cleopatra coin (Image from pepysdiary.com) and a 1979 Susan B. Anthony dollar (Image from www.preciousmetalshop.com).
Posted by Allison at 8:07 AM 1 comment:

Some of the first First Spouses coins (Image from www.coincollectingnews.org).

To continue my exploration on "gendered currency" in America, I've decided to research a bit about the First Lady coins created by the Mint. I noticed that these $1 coins with images of the First Ladies kept showing up all over the web when I would do research.

Termed the "First Spouses" coins, they first launched in 2007 and are expected to go until 2016. According to a coin collector's site, this idea has been doing extremely well, perhaps due to limited releases of certain "First Spouses". I noticed that these coins seemed to be solely collectors items, unlike the Susan B. Anthony or Sacajawea dollars. The question I wanted to ask was, since they are doing so well, why not put them on regular, circulated currency?

The Susan B. and Sacajawea gold dollars were both considered unsuccessful attempts at displaying women on American currency. This could be mainly due to these women being placed on the often unpopular one dollar coin. I am wondering though that since those two attempts were somewhat failures that perhaps the Mint decided to surpass trying to circulate famous American women on coins with instead just making them collectable coins. The Mint also seems to be releasing only a select number of these First Lady coins at a time, making them fairly valuable collectables.

I am hoping that with the success of these coins that maybe the Mint will consider making coins with famous American females on them for the future. Maybe they will consider putting females on anything else but the dollar coin, since that type of coin is unpopular in America. I believe that women need to be featured more on American currency, coins and dollars alike. I am wondering though that will females on coins only be successful if they are considered to be "valuable" collectables, rather than everyday coinage?
Posted by Allison at 7:49 AM No comments:

Today I was talking with one of my coworkers about her favorite coins. After looking through some trays of coins we stumbled upon the Standing Liberty Quarter Dollars and she told me it's story.
This type of coin has two types of what are known as "Standing Liberties." The first type, shown below, as innocent as it may appear for a coin, caused quite a controversy when it was first minted in 1917. If you look closely, you can see that one of Lady Liberty's breasts is exposed.
Apparently the American public did not take too kindly to the design and so a second type was developed (shown below). Instead of disregarding the design completely, the artist, Hermon A. MacNeil merely modified it. MacNeil placed chainmail over the exposed area on the new design, making her both appear less "exposed" and more warrior-like. Apparently, there are no records in the Mint citing "indecency" as the reason for changing the design in the coin. Instead, the reason is cited as making the design more "warrior-like," since at this time America was heading off to war. Regardless of the "correct" answer, who knew coins could cause quite a controversy?

The "indecent" Standing Liberty, Type I, 1917 (Image from www.coincommunity.com).